In the past fans would have congregated at midnight at their local music stores to get first chance to buy the new Radiohead album. 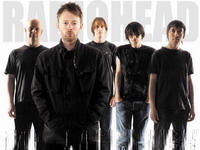 Instead, the release of Radiohead's seventh studio album, "In Rainbows," was received Wednesday with online hysteria from fans, the blogosphere and music Web sites. It was Radiohead Day in the virtual world.

There had been no advance reviews for "In Rainbows" because it was only ten days before Wednesday that the British quintet announced the imminent release of their latest opus.

Sending shock waves through a downtrodden music industry, the band said they would release "In Rainbows" themselves online. Without a record label contract (their long-term deal with Capitol Records concluded with 2003's "Hail to the Thief"), the band decided to let fans choose their price, from one pence to infinite.

Very early Wednesday morning, "In Rainbows" was available for download (DRM-free) from www.inrainbows.com. The downloading was apparently mostly glitch-free as "In Rainbows" was simultaneously unleashed upon fans, critics and industry executives alike.

In the brief lead-up, fans had energetically debated what the proper price should be for the new album. (A lavish box set is also available for about $82, but will not be shipped for weeks, and the band plans a traditional CD release early next year.) The band's manager, Bryce Edge, said earlier: "We believe if your music is great, the people will pay for it."

Was this a watershed moment for the music industry? And would the 10 tracks of "In Rainbows" be good enough to warrant the fanfare?

The first question remained unanswered Wednesday. A spokesman for Radiohead said figures on how many copies were purchased or what prices were paid were not yet available, and might never be.

Meanwhile, reaction to "In Rainbows" was pouring in.

The consensus appeared to hold that "In Rainbows" was not necessary a classic like "OK Computer" or as visionary as "Kid A," but was nevertheless a very good, relatively mellow album in line with Radiohead's work in the last six or seven years. Songs like "Nude," "Reckoner" and "House of Cards" show a warmer, more soulful Thom Yorke than fans have grown accustomed to.

The first judgment, as expressed on message boards across the Web, was disappointment at the sound quality. The MP3s are being distributed at 160 kbps, a quality higher than many MP3s (including those on iTunes), but lower than that of a CD. It is also below the threshold set by many peer-to-peer sites like BitTorrent, which mandates files be encoded at 192 kbps.

London's Times Online gave the disc four out of five stars, lauding the band for an "insidious index of sonic surprises" that would need more time to fully compute.

RollingStone.com and NME.com both posted track-by-track reviews. Blog Stereogum hosted a mammoth thread, imploring readers to post their thoughts on the album.

One posting at 3:42 a.m. read: "Sounds like Radiohead just being a band that plays songs for the first time in a while. No overriding theme (OK Computer, Hail) just solid songs. ... I need to sleep badly."

In the band's only recent interview, guitarist and instrumental wizard Jonny Greenwood explained to Rolling Stone that the band opted for the unusual release "partly to get it out quickly, so everyone would hear it at the same time, and partly because it was an experiment that felt worth trying."

On the optional pricing, he said: "It's fun to make people stop for a few seconds and think about what music is worth, and that's just an interesting question to ask people."

If nothing else, the gambit returned a long absent aspect to music fandom: anticipation. In the days of album leaks and extensive press coverage, few albums arrive with any surprise. Wednesday's excitement may have been online, but it was just as palpable as a great mass of people huddled outside music store doors at midnight.