Republicans not to support Bush

Many Republicans support President George W. Bush on Iraq, but most of them are deserting him on domestic U.S. issues sure to figure in the 2008 elections. 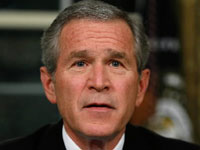 Republicans not to support Bush

Most of Bush's partymates suppose that it will be easier to break with the president in other areas, especially in tight races. It helps let them off the hook, so much so that Republican defections are sure to intensify in the coming months.

Bush will not face voters again, but a 33 of the 100 senators and all 435 members of the House of Representatives will be on the ballot in just over a year. Their votes on issues such as Bush's veto last week of a bill to expand children's health care could come back to haunt or help them.

This comes as polls show Bush's approval rating in the low 30s and Congress' approval rating even lower. An AP-Ipsos poll released last week put public approval of Bush at 31 percent and of Congress at 22 percent.

Earlier, a majority of Republicans broke with Bush on immigration legislation. Also, they did not go along with his calls for an overhaul of Social Security, the government's universal pension program, even when they had control of both chambers of Congress.

Now, Bush is trying to restore his popularity with the party's base and re-establish his credentials as a fiscal conservative, beginning with his veto of a bill that would have boosted federal spending for the State Children's Health Insurance Program by $35 billion (EUR 24.8 billion) over five years. Bush called the legislation part of an effort to "federalize health care."

Bush also has threatened to veto nine of the 12 appropriations bills that will finance operations of the U.S. government.

Economic and libertarian-minded Republican conservatives suggest Bush's overtures are too little and too late to help a despondent Republican Party bracing for the possibility that the White House will end up in Democratic hands after next November.

Bush's veto of the expansion of the children's health program and other veto threats ring hollow because of his past support for expensive programs like an exceptionally expensive prescription drug benefit for older people and his failure to veto any legislation, no matter how expensive, when Republicans ran the Congress, said Bruce Bartlett, an economist who was an adviser to President Ronald Reagan and a Treasury official during the presidency of George H.W. Bush, the current president's father.

The Republican party has seldom been so fragmented, as a rift expands between traditional economic conservatives and increasingly influential social conservatives.

Some of the harshest criticism of the administration's spending practices has comefromAlan Greenspan, former chairman of the Federal Reserve, the U.S. central bank. Greenspan wrote in his new book that his fellow Republicans deserved to lose their congressional majorities in 2006 because of runaway spending.

New York Mayor Michael Bloomberg, a one-time Democrat who left the Republican party three months ago, complained that U.S. conservatives preach fiscal discipline but "want to run up enormous deficits." He called it "alchemy at best, or if you like, lunacy."

More defections on domestic policy seem likely, especially if Democrats can follow through as they have pledged to do, by sending Bush appropriations measures as individual bills. That shifts the focus from overall spending levels to specific items - such as enhanced port security, boosting funds for medical treatment of returning Iraq veterans and a variety of domestic security measures.

Bush has claimed the veto-threatened appropriations would amount to about $22 billion (EUR 15.6 billion) more in red ink than he can tolerate.

"Congress has completed the fiscal year without completing work on a single appropriations bill," White House press secretary Dana Perino said. She said Bush would continue to prod Congress to "send the bills to him in regular order, on time, and without busting the budget and without raising taxes."

Grassley has called Bush's veto of the bill irresponsible and says he agrees with criticism of runaway spending during the six years when Bush was president and Republicans controlled Congress.

Open dissension among Republicans is stronger in the Senate than the House.

Right now, the House has proportionately more conservatives from safe districts, which means they do not have to worry about anti-Bush feedback. Also, there is a stronger sense of the importance of hanging together against a Democratic onslaught.

As of now, sponsors of the bipartisan children's health bill lack the votes in the House to override Bush's veto. The override vote is scheduled in the House on Oct. 18. But that is only the first of what could be a series of veto fights.

As Republicans get worn down by bad-news polls and disgruntled constituents, "there will be more Republican defections. And Congress may even be able to override a veto," said Norman Ornstein, an analyst who studies Congress at the American Enterprise Institute.