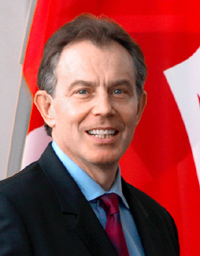 Former British Prime Minister Tony Blair has left behind such gifts as an iPod from Arnold Schwarzenegger, coins from the emir of Kuwait and a tea set from the president of Sri Lanka are when he resigned last month.

Blair received the presents between April 2006 and March 2007. Other gifts include rugs from Iraq, Afghanistan and Pakistan, glassware from Austria and wine from the government of Saudi Arabia, where alcohol is banned.

Government ministers must declare any gift valued at more than 140 pounds (US$280; EUR200), and either buy them or hand them over to their department for display or storage before leaving office.

Blair received more than 180 presents above this threshold between 2001 and March 2007 - most of which, including the iPod, he chose to relinquish.

Other notable presents over the last decade included an iron statue of a horse once owned by Soviet leader Joseph Stalin, given to him by Russian President Vladimir Putin, 18 watches from Italy's government and even a foal offered by French legislators. The foal was donated to a local family.