China's dismal product safety record - both within and outside its borders - has increasingly come under the spotlight as its goods make their way to global markets. Major buyers such as the United States, Japan, and the European Union have pushed Beijing to improve inspections. 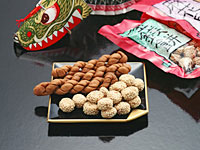 "I think it would be better if the media would stop playing up this issue," Chinese Foreign Ministry spokesman Qin Gang said at a regular news briefing.

"China has taken measures and enacted relevant legislation regarding inspection and monitoring of its food export process. China has been very responsible in this regard to ensure the good quality and safety of its exports," he said.

Fears that China's chronic food safety problems were going global surfaced earlier this year with the deaths of dogs and cats in North America blamed on Chinese wheat gluten tainted with the chemical melamine.

Qin acknowledged there are "some illegal and unscrupulous retailers" and also attributed the problems to differences between China's monitoring systems and those of other countries. But he warned the widespread media coverage would "lead to panic among consumers."

His comments came the same day the central government Web site reported that inspectors in southwest China's Guangxi region found excessive additives and preservatives in nearly 40 percent of 100 children's snacks sampled during the second quarter of 2007.

The snacks - including soft drinks, candied fruits, gelatin desserts and some types of crackers - were taken from 70 supermarkets, department stores and wholesale markets in seven cities in the region, it said.

The report did not say whether any snacks were recalled or if any manufacturers faced discipline. Repeated calls to the Guangxi Industrial and Commercial bureau rang unanswered Tuesday.

Meanwhile, some 420 bottles of fake blood protein, albumin, were found at hospitals in Hubei province but none had been used to treat patients, Liu Jinai, an official with the inspection division of the provincial food and drug administration, said in a telephone interview. No deaths or illnesses were reported.

A shortage of albumin triggered a nationwide investigation in March into whether fakes were being sold.

A state media report last month centered on an inquiry in the northeastern province of Jilin, where 59 hospitals and pharmacies sold more than 2,000 bottles of counterfeit blood protein. One person died from use of the fakes, state media said.

Albumin is a primary protein in human plasma that is important in maintaining blood volume. It is used to treat conditions including shock, burns, liver failure and pancreatitis, and is needed by patients undergoing heart surgery.

Beijing has taken steps to clean up safety problems. Inspectors recently announced they had closed 180 food factories in China in the first half of this year and seized tons of candy, pickles, crackers and seafood tainted with formaldehyde, illegal dyes and industrial wax.

Safety officials have also urged better surveillance at all levels and promised to set up a food recall system, the country's first, by year end.