Al Pacino made grand speeches on screen as Michael Corleone and Tony Montana. But when the actor was honored with the American Film Institute's Life Achievement Award, he was practically speechless. 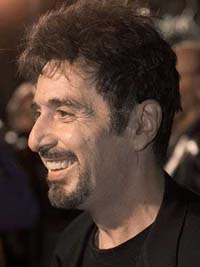 "I need a character," the 67-year-old actor said, overwhelmed with emotion. "I don't think of myself as being able to do anything."

Pacino did not have to say much, though. A host of Hollywood heavyweights - including Oliver Stone, Kirk Douglas, Andy Garcia and Robin Williams - did most of the talking when Pacino was presented his award Thursday at the Kodak Theatre.

"The depth of your artistry is only more overwhelmed by the generosity of your spirit and your warmth," said Garcia, who worked with Pacino on "The Godfather: Part III." "You're Van Gogh. You're Modigliani. That's who you are."

The three-hour dinner program, set to air June 19 on the USA network, featured clips from Pacino's most famous films, including "The Godfather," "Scarface," "Dog Day Afternoon," "Serpico" and "Scent of a Woman."

Pacino plays a cutthroat casino owner in his latest film "Ocean's Thirteen" which opened in U.S. theaters on Friday.

"Seeing my life in the movies, I have one question," Pacino said. "And that is: Why aren't I in rehab?"

Growing up in New York, Pacino discovered acting at an early age.

"By age 3, I was doing Al Jolson," he said, referring to the singer-actor who starred in the first feature film with sound. "I found, in the theater, this place I could go to. I found this peace."

The two-time Tony Award winner has been nominated for eight Academy Awards. He won in 1992 for his role as Lt. Col. Frank Slade in "Scent of a Woman."

He was honored with a Lifetime Achievement Award in 1996 by the Independent Feature Project. The Hollywood Foreign Press presented Pacino with its Cecil B. De Mille Award at the Golden Globes ceremony in 2001.

Pacino's sister, Roberta, said her brother always loved performing. She was on hand Thursday to celebrate his career, which has spanned nearly four decades.

"He's one of the greatest artists who ever lived, according to me," she said.

Oscar-winner Jamie Foxx, who worked with Pacino on "Any Given Sunday," called him "the greatest actor in the world."

"It is with great love and respect that I say goodnight to the bad guy," he said, recalling one of Pacino's famous "Scarface" lines.

The program also included tributes to Jack Valenti, who died April 26, and AFI chief executive Jean Picker Firstenberg, who is set to retire this year.