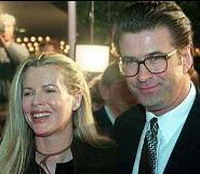 Alec Baldwin has tried to explain why he had lashed his 11-year-old daughter, Ireland, using voicemail.

He issued an apology on his Web site, sat down with TV talk show hosts Barbara Walters and Rosie O'Donnell and asked NBC to let him out of his "30 Rock" contract to devote time to the issue of "parental alienation."

On Friday, attorneys for Baldwin and his ex-wife Kim Basinger will appear in court for the first time since the tape leaked out as part of the actors' bitter, protracted custody dispute over Ireland. The couple divorced in 2002.

In the telephone message, Baldwin, 49, can be heard berating Ireland as a "rude, thoughtless little pig," for missing his call. A tape of the message was obtained by celebrity Web site TMZ.com and broadcast worldwide.

The actor blamed his former wife for leaking the tape, which she denied. He also has suggested his comments were meant for Basinger, 53, not their daughter.

The tape is only the latest issue in the custody dispute.

In October, Superior Court Commissioner Maren Nelson denied a motion by Basinger's attorney to dismiss 12 misdemeanor counts of contempt against the actress. Basinger, who has pleaded not guilty, is accused of failing to heed court orders in the case.

In November 2005, Baldwin and Basinger traded accusations of emotional instability as they argued over their rights to telephone and e-mail time with Ireland.

A separate hearing is scheduled for June 5 about the leaked tape. Baldwin's attorney, Vicki Greene, said in a court filing that the public disclosure of the tape violated a court order to keep the proceedings confidential.