It's hard to imagine a Bollywood dance routine with Mike Tyson. 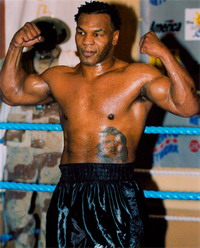 But the former heavyweight boxing champion is set to groove to Indian pop music in a promotional video for a Bollywood comedy set for a June release, the film's media consultant said Friday.

Tyson will be in India this summer to shoot the promo with the cast of "Fool n Final," said N. Chattani, in charge of publicity for the movie's producer, Firoze Nadiadwala.

"It's finalized," Chattani said. "Tyson will be shooting the music promo with the entire cast."

In the slapstick film, two diamond-thirsty gangs clash over the loot while it is being shipped from the Middle East to India.

But why Tyson? Aside from instant publicity, action hero Deol stars as a boxer.

"The movie is a laugh riot, and the filmmakers thought Tyson would be great in the promo," Chattani said.

The movie, directed by choreographer-turned-director Ahmed Khan, is almost complete, she said.

Tyson became the youngest heavyweight boxing champion in history at 20 in 1986.

His life took a nose-dive in the 1990s. He was convicted of rape in 1992 and in a separate case in 1999 he pleaded no contest to misdemeanor and assault charges. Tyson once again hit the front pages when he bit off part of Evander Holyfield's ear during a fight in 1997.

He currently faces charges of drug possession and driving under the influence of drugs in an Arizona court. He has pleaded not guilty. Tyson's case will go to trial in August.