Steve Redgrave has appealed to burglars for returning his sports awards. 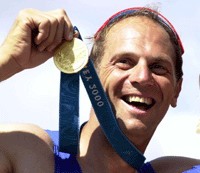 The rowing great, who won gold medals at five straight Olympics, said the stolen items had little value for the thieves.

"My grandfather's retirement watch ... is worth nothing to anyone but ourselves, as are my three BBC Sports Personality of the Year Awards, which no one could sell on," Redgrave said.

They were stolen last Saturday from Redgrave's house in Marlow, northwest of London.

"We would appeal to the intruders to please find some way of returning these items, together with the charm bracelets of my wife and her mother," Redgrave said.

The BBC said it would replace the awards if they are not returned.

Redgrave won his first Olympic gold in the coxed fours at the 1984 Los Angeles Games, and retired after winning in the coxless fours at the 2000 Sydney Games.

The Olympic medals are not kept at his house.