Take Hugh Hefner out of the running. 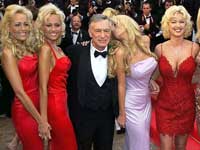 "I can make clear at this time," he says, "that I am not the father of the child."

The Playboy magnate enjoys his laugh about the paternity uncertainties still swirling around Anna Nicole Smith, but his feelings about the former Playmate turned pop icon are no joke. In serious fashion, his bunny empire will offer three upcoming Smith tributes: a 10-page pictorial in the magazine's May issue, an hourlong retrospective on Playboy TV and an online memorial on Playboy.com.

Smith, who first appeared on the magazine's cover in March 1992 and was named Playmate of the Year in 1993, was 39 when she died of an accidental drug overdose in February.

So what was it about the buxom blonde Texan that Hefner found so alluring?

Smith often posed like Monroe, he said. At a Halloween party in 2004, she came dressed in a "Marilyn Monroe-type outfit" accompanied by three men in tuxedos: her attorney Howard K. Stern, boyfriend Larry Birkhead and son Daniel.

"The irony in terms of Anna Nicole's fascination with Marilyn Monroe is how successful she was in building a similar kind of career, not through acting but simply through celebrity itself," said Hefner, in his usual silk pajamas and smoking jacket. "The tragedy is she lived large as Marilyn did and died in a very similar way."

She was still Vickie Smith when she first caught the eye of Playboy editors, who argued over whether to include her in the magazine.

"She came here and she weighed about 160 pounds," (about 75 kilograms) Hefner recalled. "We like the voluptuous ladies but not that voluptuous. It was a wonderful statement for the simple fact that beauty has no limitation in terms of size. You can be a big lady and a beautiful lady, and she was."

With three tributes, might Playboy be opening itself to criticism for profiting from Smith's death? Not the case, Hefner quickly replied. "It's quite frankly celebrating her in a way that she would appreciate."

The publishing titan turns 81 on Monday, but makes little concession to the calendar. He just celebrated his birthday with a bash in Las Vegas, and recently started work on the third season of "The Girls Next Door," an E! reality show about life with his girlfriends Holly Madison, Bridget Marquardt and Kendra Wilkinson. Their upcoming adventures include an appearance at the Toyota Grand Prix, where Hefner will serve as grand marshal (and Wilkinson will drive a race car), and a trip to Monte Carlo at the invitation of Prince Albert, Hefner said.

And the chatter about Hef getting engaged? Just rumors, he said.