Owing to unusually warm weather thousands of seals drowned and it has limited hunters' catch to a mere 400 animals in the first phase of Canada's controversial seal hunt. 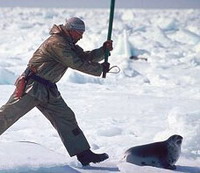 That is thousands less than is usually the case, said Fisheries Department spokesman Phil Jenkins. He said the weather conditions in the southern Gulf of St. Lawrence have hurt a traditional spring hunt that is important to the livelihood of Canadian seal hunters and aboriginal peoples.

Fishermen sell seal pelts mostly for the fashion industry in Norway, Russia and China, as well as blubber for oil, earning about US$78 (58 EUR) per seal. But animal welfare groups and several celebrities have spoken out against the hunt.

Officials say poor ice conditions are part of a trend seen over the past four or five years.

Newborn seals cannot swim in the first weeks of life and need solid ice to survive.

The total quota for all three phases of this year's seal hunt is 270,000 animals. That is 65,000 fewer than last year, a change made mainly because of the toll from the ice conditions. The government estimated the seal population in Canada in 2004 at about 5.5 million.

The largest concentration of seals in the Gulf is in the northern part and that second phase of the hunt began Wednesday. Ice conditions are normal in the north where thousands of seals are expected to be killed.

Jenkins said bad weather and poor visibility limited the hunt to about 12 boats on Wednesday.

About 70 percent of the seals sought in Canadian waters will be taken in the third stage of the hunt - off northern Newfoundland. An opening date has yet to be announced.

Animal welfare groups condemned the government's decision to allow a hunt in the southern region while not allowing any permits for observers.

"To us, that says there's something the Canadian government didn't want the public to see," said Rebecca Aldworth of the Humane Society of the United States.

"In this case, I believe it was the image of just a few seal pups clinging to tiny pans of ice and seal hunters still coming with clubs and guns and shooting and killing every last pup they could find."

The hunt has been condemned by some celebrities, including former Beatle Paul McCartney and his estranged wife, Heather Mills, as well as French film legend Brigitte Bardot and actress Pamela Anderson.

The Canadian government and isolated fishing communities insist they need the supplemental income, since cod stocks have dwindled. The slaughter of some 335,000 seals in 2006 brought about US$25 million (18.8 million EUR).

The United States has banned Canadian seal products since 1972 and the European Union banned the white pelts of baby seals in 1983.

The European Commission said in March that it would launch a study to see whether seal hunting in Canada is carried out in a humane way, though it has so far rejected calls for an EU-wide ban on the import of adult seal pelts and other products.