Documents of Martin Luther King to be auctioned

A folder containing letters, notes and speeches beloning to Martin Luther King Jr. is set to be auctioned off in two weeks. 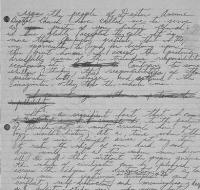 Documents of Martin Luther King to be auctioned

Isaac Newton Farris, president and chief executive officer of the King Center in Atlanta, said he had no idea the papers existed until Monday.

"Unless the woman has documentation that the papers were given to her, they are owned by the King Estate," Farris said Tuesday. "We're moving forward to get as much information as we can about that."

The collection had sat in the basement of a King friend for nearly 40 years. The woman said she got the papers in a debt settlement with a radio station connected to King, according to Gallery 63 in Atlanta, which is hosting the April 15 auction.

The Gallery 63 Web site describes the papers as a collection of "about 25 previously unknown documents," including first drafts of speeches and letters to and from King, all dating from the early to mid-1960s.

Brown said he has already received about 20 or 30 inquiries about the collection. He would not name the interested parties but said they included two educational institutions and two "high-end, well-known Atlanta collectors."

Brown would not disclose the woman's identity, but he said she is an Atlanta native and a childhood friend of King's.

The King family recently sold a large collection of King's papers to the city of Atlanta for $32 million (EUR24 million). Those documents, numbering more than 10,000, were placed with Atlanta's Morehouse College, the 1964 Nobel Peace Prize winner's alma mater.

Wednesday will be the 39th anniversary of King's assassination. King was killed at the age of 39 by a sniper as he stood on a balcony at the Lorraine Motel in Memphis, Tennessee.