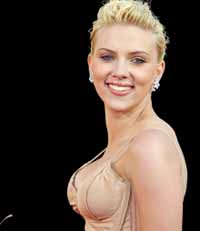 Ben Stiller and Scarlett Johansson have been announced as the recipients of this year's Hasty Pudding awards, handed out by students at Harvard University .

The pair will be honoured with a fancy dress parade, followed by a performance by Harvard's student drama group, in which they'll take part.

The annual awards are given to performers who have made a "lasting and impressive contribution to the world of entertainment," informs Ireland Online.

According to Guardian Unlimited, Johansson, 22, will lead a parade through Cambridge on Feb. 15, then attend a roast in her honor and receive the "Pudding Pot." The ceremony for Stiller, 41, is Feb. 23.