Chuang Chuang the Panda is just too heavy to have sex. 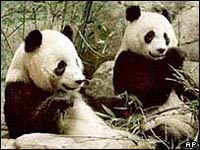 That is the conclusion of Thai authorities, who have put the male panda on a strict diet as part of a long-running campaign to get him to mate with the female partner Lin Hui at the Chiang Mai Zoo in northern Thailand.

"Chuang Chuang is gaining weight too fast and we found Lin Hui is no longer comfortable with having sex with him," said the zoo's chief veterinarian Kanika Limtrakul, adding that Chuang Chuang weighed 150 kilograms (331 pounds) while Lin Hui is only 115 kilograms (253 pounds).

As a result, zoo authorities are cutting out bamboo shoots in the daily meal for Chuang Chuang and giving the obese bear only bamboo leaves, Kanika said.

The diet plan is the latest in an unsuccessful and often strange campaign by zoo officials to get the two bears to mate.

Thailand rented Chuang Chuang and Lin Hui from China for US$250,000 (Ђ192,964) in October 2003 for 10 years. They are expected to generate millions of dollars in revenues from Thai and foreign tourists, reports AP.

There are as few as 1,600 giant pandas in the mountain forests of central China, according to the zoo. An additional 120 are in Chinese breeding facilities and zoos, and about 20 live in zoos outside China.

Pandas are threatened by loss of habitat, poaching and a low reproduction rate. Females in the wild normally have a cub once every two to three years.