A wildlife worker pulled a two-meter-long (seven-foot-long) python from a septic tank Wednesday after a plumber found it hiding in a domestic toilet, officials said. 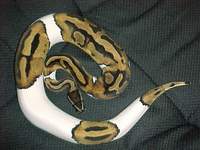 Peter Phillips, of the Northern Territory's Parks and Wildlife Service, was called to remove the snake after a plumber fixing a blocked toilet discovered it curled in the pipes.

"The ... resident originally called a plumber because her toilet was blocked," Phillips said in a statement released by the Northern Territory government. "I arrived to see a large python head peering out of the toilet bowl."

Phillips removed the snake, which is indigenous to Australia, from the septic tank because it had grown too big to be pulled straight from the toilet.

The mostly nocturnal carpet python had probably taken up temporary residence in the tank because it was a good place to hide during the day and hunt for frogs, he said, the AP said.

"The tank was obviously a great home, because the snake was so fat and healthy it was difficult to retrieve it," Phillips said, adding that the nonpoisonous snake will be released later Wednesday.