Loved the book, hated the film: top books have tough road to the big screen

The book, while hardly high culture, keeps the heart racing. The film, most critics agree, is more like a tranquilizer shot. "The Da Vinci Code" is just the latest proof that what keeps you turning pages late at night won't necessarily keep you awake in the theater. 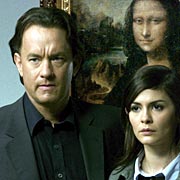 Loved the book, hated the film: top books have tough road to the big screen

Why? Partly because readers expect so much from the film version of a book they've loved and lived with for hundreds of pages. And partly because filmmakers often try to recreate the book in all its scope, a losing proposition. Can a movie ever capture the sweep, the imaginings, the intensely personal experience of a book?

Rarely, says Jane Shepardson, a loyal book-club member for the past seven years in her hometown of Chappaqua, New York.

"You want to form your own picture in your own mind," she says of the characters, the places, the way things look, feel and smell. "That kind of experience can never be replaced by a movie. It's a fabulous and challenging thing. I don't want someone doing it for me."

That doesn't mean Shepardson, 44, doesn't like films. It's just that when she's loved a book, she wants to retain images she's stored in her mind. So she stayed away from the 2003 "House of Sand and Fog" because she so adored the novel by Andre Dubus III.

Julia Stroud, a college student from Philadelphia, eventually plans to see "The Da Vinci Code," but she's already skeptical. Ever since she read the book, she's pictured the main character, Robert Langdon, as a swarthier Russell Crowe type, "not the guy-next-door Tom Hanks type." Harrison Ford, maybe, but not Hanks.

Stroud especially loved Arthur Golden's novel, "Memoirs of a Geisha," finding it both intricate and enthralling. Not so for the film: "It was long. It was boring. I fell asleep."

Golden, who didn't write the screenplay, says it was surreal to see his characters, whose precise visual features he'd never imagined in his own mind, up on screen. Yet he notes the difficulties facing the filmmakers.

"When you're writing a novel," he says, "you don't have to make a decision on whether the coffee cup leaves a ring on the table, or how someone's fingernails look. In the movie, you have to. People often feel the book is better because the film rigidifies what's in the book, and casts it in a way that is very literal."

And usually, a sense of scope is lost after all, a book is hundreds of pages long (450, in the case of "The Da Vinci Code.") "The movie almost always disappointing because it's thinner," Golden says.

The crucial thing to remember, he says, is that books and films are very different. "You can't go to a movie and expect it to be the book. The book is always the book. Viewers know the difference," reports AP.