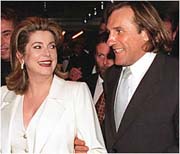 The festival's award for best international film, however, went to British director Michael Winterbottom for "A Cock and Bull Story."

The festival which is celebrating its 25th anniversary this year honored Turkish actress Serif Sezer, comedian Sener Sen and director Erden Kiral for their contributions to Turkish cinema, reports AP.