French Tourism Minister Leon Bertrand on Friday accepted the Istanbul Film Festival's lifetime achievement award on behalf of actor Alain Delon, who failed to show up at the last minute. 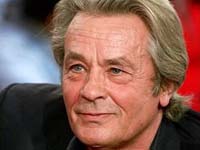 "I am not Alain Delon you must be disappointed," Bertrand, a guest of honor, told the audience at the festival's opening ceremony.

Delon informed Bertrand Friday morning that he would not be able to attend due to "a last minute and personal impediment," the minister said.

Eleven international films are competing for the festival's Golden Tulip award, including Swiss director Christian Frei's "Giant Buddhas," a film about the destruction of ancient Buddha statues by the Taliban in Afghanistan, and British director Julian Fellowes' "Separate Lies" which tells the story of the lives of a married couple being turned upside-down by the arrival of another man.

The festival, which is celebrating its 25th anniversary this year, kicked off with the screening of "Merry Christmas" a film about World War I fraternization across enemy lines, reports AP.