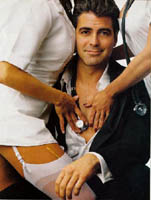 Clooney donated the bag to the charity organization United Way, and it sold Wednesday for $45,100 (Ђ37,545) in an extended online auction that began March 21, organization spokeswoman Sheila Consaul said.

The winner would only be identified as a family from Birmingham, Ala., Consaul said.

The bag given to presenters at the 78th Annual Academy Awards included a BlackBerry 8700c, a Kay Unger kimono and a cultured Tahitian-pearl necklace.

It's Clooney's practice to make donations when receiving such gifts, said the actor's publicist, Stan Rosenfield.

The auction was scheduled to close at 11:59 p.m. Tuesday but was extended 41 minutes because of a high volume of bids.