George Clooney, a handsome prankster with twinkling eyes, arrived in Berlin to promote his new film Syriana at the 56th Berlinale, the first major European film festival of the year. 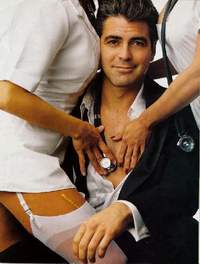 Syriana is a thriller on the global oil industry starring George Clooney as a CIA veteran operative.

Clooney did not look a veteran spook at the Berlin Film Festival. He already lost some weight and shaved off his beard. All in all, he looked a 100% Hollywood star. George Clooney is a frequent Berlinale guest. The rumors are still circulating through the town about the actor’s charm and his skills to do the talking at a press conference. During the latest conversation Clooney was offered a sightseeing trip to different cities of the world, from Berlin to Beijing. In his turn, he promised to buy a martini to the girl – a guide from a tourist agency.

Q: Syriana is your second film over the last few months dealing with political issues.

Good Night and Good Luck was released last September, now you star in a thriller on a U.S. shortsighted policy in the Middle East. Do you think the subject holds any interest for the viewer?

A: Actually, Good Night was meant to be a low-key, black-and-white picture, that’s the only reason why I began shooting it. I thought it would be a low-budget movie. Needless to say, I was wrong. We have started talking about U.S. political issues again, probably the first time since the Watergate scandal. That is something. I believe we – actors and directors – should push and ask questions if we can push and ask questions that are sensitive to the government. History is going round in circles, every thirty years my country goes insane, then everything goes back to normal. That’s why I’m proud to be an American.

Q: Both your pictures have been nominated for Oscars. Do you think you have good chances of winning?

A: You are fun to talk to. Do you think movies are made to win Oscars? Making a movie involves a great deal of work. You won’t make a good movie if you concentrate on Oscars beforehand. We are unlikely to win anything in March. Brokeback Mountain has a strong support group. And the movie is not bad, after all. So we’ll have to step aside and let those guys be the cowboys for awhile.

Q: You put on 30 pounds for 30 days for your part in Syriana. How did you lose weight after the shooting was over?

A: I did drugs. Cocaine. (laughs). Sincerely, I was on a diet and I exercised. I’m in pretty good shape now, don’t you think? I grew a big unsightly beard for that role. You know, I liked looking like a regular guy. You can do whatever you like. You have to wait for a table in a decent restaurant, though. Nobody believes I’m George Clooney.

Q: Gaining and losing one’s weight is not good for the body. How did make up your mind to play in the movie?

A: My parents were involved in politics so I was interested in it from the very start. Besides, I wanted to have a shot at something new. I find Bob interesting. He honestly believes that neither CIA nor his government can go wrong. But it’s the CIA that tore down his life. He estranged from his wife and son. Besides, no sequel is planned for Syriana. It’s good news.

Q: What are your plans for the nearest future?

A: Hmm… I’m going to take a bath. Are you serious? Well, it’ll make you laugh – I’ll take part in a sequel called Ocean’s Thirteen. And another movie called A Good German, set in a postwar Berlin though it was shot in L.A.

Q: Rumor has it Syriana came out 10 minutes shorter after the final cut.

A: Yep, it was another CIA-led conspiracy.