In the 16 years since Mariah Carey was awarded best new artist at the Grammys, she has more than lived up to the promise the award presaged, becoming one of the most successful recording artists in history. 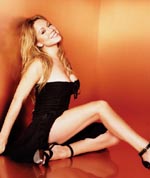 Yet despite a slew of blockbuster albums and megahit singles, Carey's Grammy total has not increased since that evening in 1990 when she won her first two and only trophies from the Recording Academy.

But Wednesday night, Carey chosen for a leading eight Grammy nominations along with Kanye West and John Legend had the opportunity to make up for past Grammy shutouts. She could make history as the first female artist to win six or more Grammys in the single evening. (Norah Jones, Beyonce, Alicia Keys and Lauryn Hill each won five.)

Carey was clearly the leading favorite heading into the music industry's most celebrated evening, nominated in the most prestigious categories, including record and song of the year for her torch ballad "We Belong Together," the year's most popular song, and for album of the year for "The Emancipation of Mimi," 2005's best-selling album.

But Carey faces tough competition: For record of the year, her fellow nominees include West's "Gold Digger," the Ray Charles-inspired hit about money-hungry gals; the poignant "Boulevard of Broken Dreams" from Green Day; Gwen Stefani's undeniably catchy "Hollaback Girl"; and the funky "Feel Good Inc." from the cartoon-fronted band, the Gorillaz.

The album of the year category also has strong contenders. West, nominated last year for his groundbreaking rap debut "The College Dropout," is nominated for a second time for "Late Registration"; U2 is nominated for "How to Dismantle an Atomic Bomb"; Stefani is up for her kitschy solo debut, "Love. Angel. Music. Baby."; and Paul McCartney is nominated for "Chaos and Creation in the Backyard", reports AP.