Pope Benedict XVI said Monday that he hoped the blood shed by a Roman Catholic priest slain in Turkey over the weekend would become the "seeds of hope" to build a lasting fraternity between peoples. 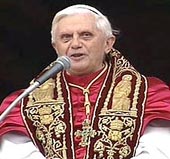 Benedict sent telegrams of condolences to church authorities in Italy and Turkey following the killing Sunday of the Rev. Andrea Santoro, 60, who was shot as he prayed in his church in the Black Sea port city of Trabzon, where he was the parish priest for a small Christian community.

The gunman shouted "Allahu Akbar" Arabic for "God is great" as he escaped, police and witnesses said.

The Vatican newspaper, L'Osservatore Romano, suggested Monday the slaying was related to recent protests in the Muslim world over caricatures of the Prophet Muhammad, saying in a front-page article that the killing "fits into the climate of tension in recent days."

Italy's foreign minister, Gianfranco Fini, said he stressed in a phone call with his Turkish counterpart, Abdullah Gul, of the need to "isolate extremist elements" in Turkey following the slaying, particularly in light of the protests over the caricatures.

During the phone call, Fini also called for increased local surveillance while "following a policy of dialogue, collaboration and respect for religious values and identities," a statement from Fini's office said.

While numerous Italian politicians hailed Santoro as an example of Christian concern for other cultures, one Cabinet minister said the slaying gave weight to his right-wing's party adamant opposition to Turkey's entrance into the European Union.

"The hypothesis of Turkey's entry in Europe has never existed, but now, after the vile murder of Father Santoro, I truly hope that this hypothesis is dead and buried, once and for all," Reforms Minister Roberto Calderoli, a leader of the anti-immigrant Northern League party, said in a statemen, reports AP.