In the US city of Fort Wayne, Indiana, a large doll resembling President Donald Trump was seen hanging from a tree. The author of the "performance" put a Soviet flag in the hands of the doll. 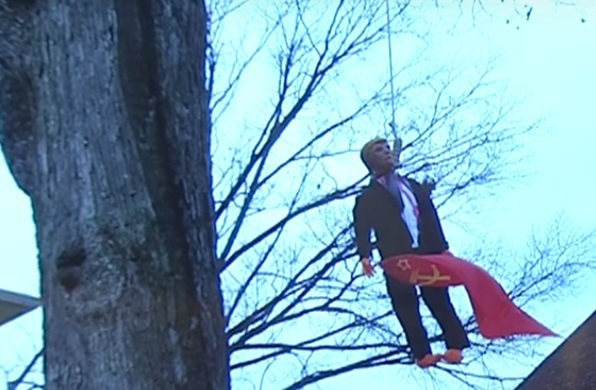 Reportedly, it was a US war veteran who hung Trump's effigy. The veteran refuses to speak to reporters. According to local residents, the doll appeared soon after the inauguration of the hew head of state.

The appearance of the doll of President Trump hanging from a tree with a Soviet flag in its hands has left many local residents uncomfortable. Yet, the police has not taken any action against the veteran, because the "executioner" uses freedom of expression.

Earlier, US President Donald Trump signed a decree that suspends the reception of refugees in the United States for 120 days, prohibits the accommodation of refugees from Syria and denies entry to the USA for citizens of Iraq, Iran, Syria, Sudan, Yemen, Libya and Somalia.

Representatives of the Democratic Party in the Senate called the move a "betrayal of American values."

"Trump, I think, is making a mistake by running all these reforms too fast. It looks like he is an a hurry, and this is his mistake. He should think about natural reaction that comes from those who disagree with him, including the Democratic Party that looks for any opportunity to stop him.

"Trump makes tactical mistakes, but he is absolutely right from the strategic point of view. There is nothing radical in his suggestions. He is going in the right direction, but with bad PR. Unfortunately, one can not do without Pr in politics," president of the American University in Moscow, Eduard Lozansky told Pravda.Ru