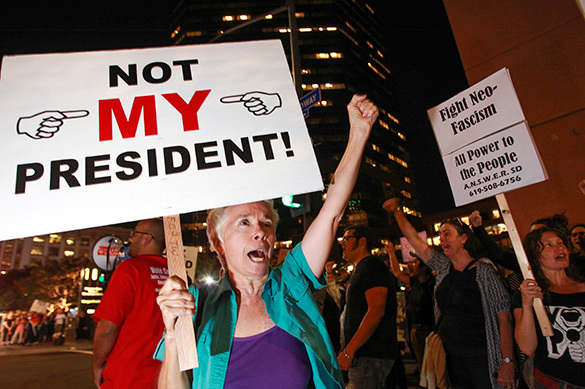 It was obviously going to happen, it was predictable, because the anti-Trump front that invokes "inclusion", "demolition of border walls", "tolerance" and "peace" is way far from being tolerant and peaceful.

In fact several major cities in the US such as Los Angeles, San Francisco, Oakland, Seattle, DC, Austin, Boston, Philadelphia, Portland and Chicago have been experiencing, right after the Presidential elections result, serious acts of vandalism, American flag burnings, fires, blocking of car traffic. Sticks of fire were thrown at the police while chanting "stop police violence".

Among the other slogans, "P***y grabs back", "Not my president", "Trump go home". Several violent protesters were arrested during the night, thirty only in Manhattan.

Among the major events:

In Oakland, California, some demonstrators smashed shop windows and threw missiles at riot police, who reportedly responded with tear gas.

A mass anti-Trump rally shut down a key freeway in Los Angeles.

In Chicago, crowds blocked the entrance to Trump Tower, chanting: "No Trump, No KKK, No Fascists USA".

Paradoxically, those who call the victory of Trump a "rise of fascism" are the first ones to be using fascist methods, going against a popular vote and against the course of the democratic electoral mechanism. It is clear that these people invoke democratic principles only as long as they win elections. Double standards.

The Clinton/Obama supporters, the anti-Trump movement, were so sure to win that they were caught in full shock by the electoral result that did not only end up in a Trump victory, but in a major defeat for the Democratic party, which lost both Houses of Parliament.

Last night the anti-Trump movement has obviously taken the path of violent extremism and the dynamics of last night's protests seem way far from spontaneous, but actually coordinated, well-prepared and with specific targets: the Trump towers, police agents, shops, main squares, freeways and highways. Maybe it is not so much of a conspiracy-theory to ponder who could be behind such a coordinated "peaceful" protest and why.