Photos of Stalin's granddaughter are gaining popularity on the Internet. The photos show 44-year-old Chrese Evans wearing freak-like makeup, ripped tights, skimpy shorts and a toy gun in her hands. 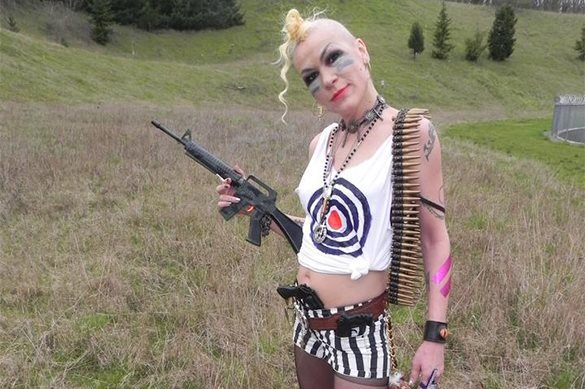 Chrese Evans is a daughter of Svetlana Alliluyeva from fifth marriage. She lives in Portland, Oregon, where she owns a small antique shop. Her mother - the only daughter of Joseph Stalin - died five years ago.

In 1966, her mother, Svetlana Alliluyeva, went for a friendly tour of India. In India, Svetlana went to the US embassy to seek political asylum. In 1970, Svetlana, who had changed her name to Lana Peters, married a US citizen; they had a daughter, Chrese.

In 1984, Stalin's daughter decided to go back to her homeland. She had lived in the USSR for two years before going back to the United States again. According to some sources, Chrese Evans stopped communicating with her mother after her escape to the Soviet Union. Their relations did not improve even when Svetlana returned.

Svetlana died in the USA n 2011 and was cremated.