Migrants' parties may occur in Germany

Germany has put into effort simplified procedure for the refugees, Arabians and Africans to gain citizenship. Their children born in Germany will get citizenship automatically. As Chancellor Merkel claimed, Germany will not deport illegal immigrants, as Hungary does. She also convicted protests against the islamization of Europe in one of her speeches. Doesn't she realize that it is a threat to the cultural identity of Europe? 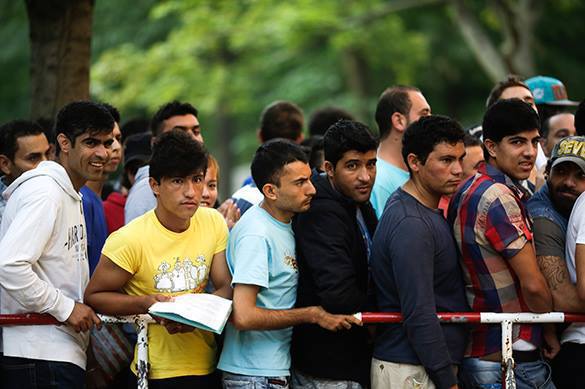 Vladislav Belov, head of the Center for German Studies with the Institute of Europe commented Pravda.Ru on the issue.

As he noted, Merkel says that other countries' citizens, crossing the border of the EU on various grounds should be integrated. "Whatever difficult the process may be, the Chancellor is right, that there is no other way out. They should look for tools to integrate these citizens in the cultural, historical, social and economic field of Europe.

Realizing that this field is not united as well, every country has its own peculiarities at least, Germany claims that it is ready to integrate such citizens despite all the difficulties. If this problem is not being solved, it will be a direct way to radicalism, nationalism, revival of all negative tendencies, which had been present in Europe in the first half of the XX century. Thus, Merkel offers to keep this process under control," Vladislav Belov said.

The media is full of reports on protests backing the refugees with such mottoes as "Germany should be coloured!", "Let's help our brothers". According to Belov, these acts are carried out by the citizens of Germany. "We should bear in mind, that the vast majority of population, which was brought up in the post-war period, fully realizes the problems refugees face, and stand for their support. Here is a natural wish to support people. These are German citizens free of nationalism, radicalism, and so on,"the expert explained.

Vladislav Belov also claimed that there can occur parties in Germany, which will be based on the migrational sentiments. Today, as he noted, the existing parties try to rest upon the sentiments in the Turkish communities, and there are MPs of the Turkish decent.