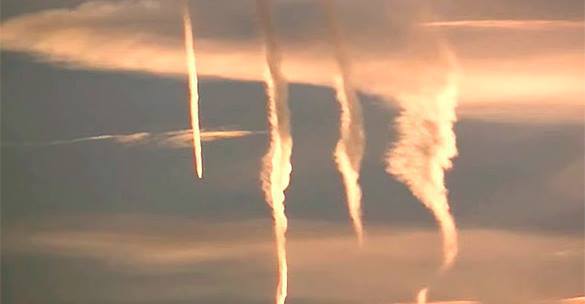 Residents of the US  city of Davison, Michigan, as well as other Americans, speculate about the nature of a strange phenomenon, the video of which was made in September 25, 2014.

The video has recently appeared on YouTube and has already received over 180,000 views.

The people who made the video said that they did not hear any unusual or extraneous sounds. "I was NOT around any body of water during recording. I did Not hear ANY plane/jet or explosion. I did NOT see any plane/jet or object. Even with binoculars in which we where ALSO using. No object was observed. This is exactly what we saw," the author of the video said.

Also read: UFOs start to sppear above Moscow on a regular basis

Many assume that the eyewitnesses of the balls of fire in the sky could see the remains of a comet or a meteor shower. Others say that it could be a UFO or the debris of a falling satellite.