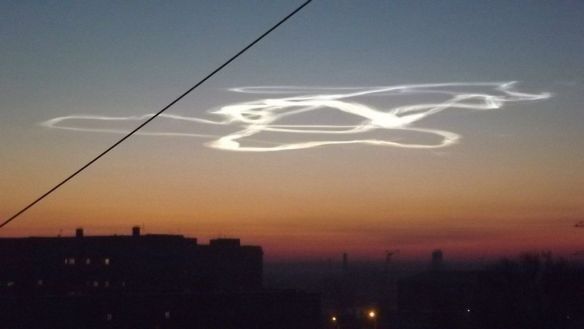 Early in the morning of December 15, 2014, many residents of the city of Barnaul eye-witnessed "a sign from above." People could see glowing stripes in the sky. The stripes were intertwined into a shape reminiscent of a butterfly.

Soon afterwards, experts dispelled speculations about the origin of the unusual phenomenon. According to them, Barnaul residents could see traces from the launch of a Proton-M carrier rocket. Many local residents assumed that the stripes appeared in the sky on account of an extraterrestrial activity.

Deputy Director of the Barnaul planetarium, Natalia Pavlova, said: "At first, we had two versions to explain the origin of the sky stripes. The first one was about a cosmic body, a meteor that entered the Earth's atmosphere. On December 13 overnight, we could observe the Geminids meteor shower. The second version was about the traces left after the launch of the carrier rocket Proton-M. As a result of our investigation, we concluded that the stripes were left in the sky after the launch of the carrier rocket that took place today at 06:15 local time (03:15 GMT), from the Baikonur Cosmodrome. Already at 06:30, the residents could see the glowing stripes. Afterwards, the wind created an unusual shape from the stripes.