Islamist militants from the Islamic State faction in the Iraqi city of Mosul have been destroying cultural landmarks and religious shrines, claiming they are contrary to Islam. The residents are fighting back. 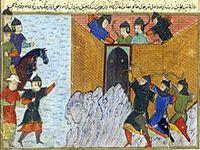 At the weekend the Islamic State militants decided to target the 840-year-old Crooked Minaret and converged on the area armed with explosives. Hundreds of local residents ran to the area and packed the courtyard, telling the militants that if they destroyed the Minaret then they would have to do so over their dead bodies. The militants backed down and went away. For now.

In the last few weeks, however, the militants have ignored pleas from locals and have begun a systematic iconoclastic campaign to destroy all monuments they claim do not respect Islam, because they claim that by representing figures other than Allah, they are encouraging worship away from Allah.

The militant faction has been in control of Mosul since June.