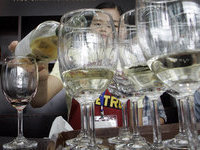 The study was published by experts of the USDA Center for Nutrition Policy and Promotion. "In general, most adults do not drink at all, but the problem has been getting more serious among drinking people," Patricia Guenther, who led the study.

Guenther and her colleagues collected the information based on the data of federal research on nutrition and health, which included 5,400 men and women over 21 years of age. Each of them was asked a series of questions, including: "How much did you drink yesterday?"

Noteworthy, the research was based exclusively on opinion polls.