Doctors save little girl despite prohibition from her father, a Jehovah's Witness

In St. Petersburg, doctors obtained the right for a blood transfusion surgery for a 15-month-old girl, who had suffered in a car accident. The doctors received the right for the operation through court action. The girl's father, a Jehovah's Witness, had said that he would not let the doctors save his daughter's life for religious reasons. 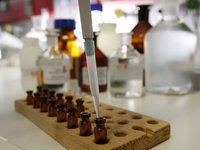 The car accident took place on March 26 in St. Petersburg. A man ran over three pedestrians, including a woman with a stroller. The girl, aged only 15 months, suffered an open cranial injury.

A blood transfusion surgery was required to save the child. However, the girl's father stated that he would not let the doctors perform the operation. It turned out that the man was a Jehovah's Witness, whose religion prohibits the procedure even in life-threatening situations, NTV reports.

The man hired a lawyer. However, the doctors addressed to the office of the Commissioner for Children's Rights, Svetlana Agapitova. The commissioner immediately reported the situation to a local court, child protection agencies, the municipal administration, the Office of the Public Prosecutor and to the Health Care Committee. The court gave the medics a permission to perform the blood transfusion operation despite the parent's prohibition.

The operation went successful, but the girl still remains in a an extremely critical condition.