World's largest Ferris wheel to be built in Moscow 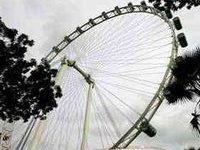 The largest Ferris wheel in the world may appear in Moscow in the near future. The attraction 220 meters high will beat the records of world-famous London Eye and Singapore Flyer.

The Moscow administration currently considers three possible locations for the attraction. The wheel may appear near the circus on Vernadsky Prospekt, on the territory of the All-Russian Exhibition Center and in the Gorky Park, Vesti.ru reports.

The Moscow wheel will have no inner arms. The gondolas will move on special railings. The entire construction will be based on another wheel that will house a concert hall, galleries, stores and food courts on the territory of nearly 30,000 square meters, Arguments and Facts reports.

The Moscow government approved the construction of the Ferris wheel on Vernadsky Prospekt in 2002. The project has not been implemented, though. Now the government of the Russian capital decided to revisit the idea.

If the wheel eventually appears in Moscow, it will beat the records of the world's tallest attraction Singapore Flyer (165 meters) and the well-known London Eye (135 meters).