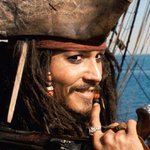 Hollywood actor Johnny Depp surprised schoolchildren in Greenwich when he made a shock appearance as Captain Jack Sparrow from Pirates of the Caribbean.

Depp's visit came after nine-year-old pupil Beatrice Delap wrote to his alter-ego asking for help raising a mutiny against her teachers at Meridian Primary School in Greenwich, south-east London.

In the letter, the youngster wrote: "We are a bunch of budding young pirates and we're having trouble mutinying against the teachers! We'd love it if you could come and help!"

During the school visit, Depp, dressed as Captain Sparrow, spent 15 minutes performing pirate songs and dancing in front of pupils with four other cast members from Pirates of the Caribbean: On Stranger Tides, The Press Association reports.

It's not the fist time Johnny has surprised kids dressed as his swashbuckling alter ego. In 2008 he delighted youngsters at Great Ormond Street Hospital when he turned up as Captain Sparrow to read bedtime stories.

Weeks later he donated £1million to the hospital, which had saved the life of his daughter Lily Rose. She was rushed in when her kidneys failed while Johnny and his family were in the UK during filming for Sweeney Todd, according to hellomagazine.com.