In an appearance Sunday morning on “This Week With George Stephanopoulos,” the host read Mrs. Clinton a passage from the Palin book: 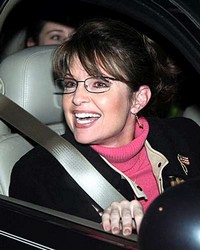 "Should Secretary Clinton and I ever sit down over a cup of coffee, I know that we will fundamentally disagree on many issues. But my hat is off to her hard work on the 2008 campaign trail. A lot of her supporters think she proved what Margaret Thatcher proclaimed: ‘If you want something said, ask a man. If you want something done, ask a woman," The New York Times reports.

It was also reported, Sarah Palin appears on Oprah on Monday to mark the launch of her book, "Going Rogue." She'll follow up with an extensive interview with Barbara Walters, a multicity book tour and appearances on the Fox News Channel and talk radio.

She'll grab plenty of headlines. As you read about Palin's old-media tour, it's important to remember that she's also a pioneer in the political use of new social media. Not that she gets any credit.

Sometimes the most important revolutions are the quiet ones. This is especially true in the case of technology, which has a way of sneaking up on us.

Take cell phones, for example. A decade ago, they were a luxury item. Suddenly, everyone seemed to have one. What had once been a sign of status became commonplace, all with hardly anybody noticing -- and without any central direction , CNN reports .

Meanwhile, t here's also plenty of media bashing, according to an excerpt leaked to the Drudge Report Web site. Palin was barred even from talking to the reporters on her campaign plane, according to the excerpt of her book.

"By the third week in September, a 'Free Sarah' campaign was under way and the press at large was growing increasingly critical of the McCain camp's decision to keep me, my family and friends back home, and my governor's staff all bottled up," according to the excerpt on Drudge.

But in the same passage, she snipes about her interview with Katie Couric, saying that a McCain-Palin aide urged her to do the interview because the CBS anchor had "low self-esteem."

There's also a long, dull section on the natural gas pipeline, tedious to everyone but Alaskans, warns one television producer who had an embargoed copy of the book in preparation for Palin's appearance on his boss's show , MiamiHerald.com reports .