A Dutch court intervened Friday to stop a 13-year-old girl from attempting to sail around the world by herself, stripping her parents of sole custody. Laura Dekker's parents support her round-the-world ambition, which sparked concern from child protection officials because of her age. They took the case to court to prevent the solo trip. 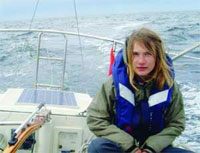 On Friday the Dutch High Court in Utrecht ruled that the Child Protection Board will share custody over Laura with her parents for two months.

The move prevents the parents from permitting Laura to set off on her trip alone, though Laura will remain at home with her father, Dick Dekker, a court official said, CNN informs.

According to Telegraph.co.uk, Dick Dekker, Laura's father, collected her from the home and defied the authorities by letting her make the sea crossing alone.

The British police then contacted their Dutch counterparts who alerted the Utrecht social services, leading to Friday's custody decision.

Miss Dekker pleaded earlier this week in front of the court to be allowed to take her yacht, named Guppy, on the voyage, beginning on Sept 1, after she had turned 14.

"My parents always knew it was a dream of mine to do this. And I want to do it while I'm still young, so I can break the record," she said.

Mr Dekker - who did not make any immediate comment on the ruling - had earlier had a request for her to miss two years of school turned down.

Miss Dekker had planned to spend about two years aboard her 26ft (8m) boat, Guppy, to break the record set this week by a 17-year-old UK boy.