In 2008, Americans drank 8.6 billion gallons of bottled water, double the amount of a decade ago, with more than half saying they drink it because it is safer and healthier than tap water. 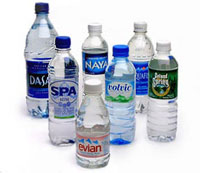 But at a hearing Wednesday, members of Congress were briefed on two new studies that question whether bottled water is safer than water directly from the faucet. Afterward, the committee sent letters to companies requesting more information about the source of their water and how it is tested, The New York Times reports.

Just less than 2 percent disclose the water’s source, how the water has been purified and what chemical pollutants each bottle of water may contain. Only two of the 188 individual brands EWG analyzed disclosed those three basic facts about their water, Examiner.com reports.

In the meantime The sub-committee chairman, Rep. Bart Stupak, D-Mich. says, according to reports by The Wall Street Journal, the past several years have seen bottled water manufacturers recall water contaminated with bacteria, arsenic and cleaning compounds.

GAO reports, two to three FDA employees are assigned the task of inspecting water bottling companies, asking the latter to adequately label and subject their product to stricter oversight, since a product such as bottled water is consumed by millions of Americans, who spent over $11-billion on bottled water last year, Visit Bulgaria reports.