Do Afghans know who Jude Law is? 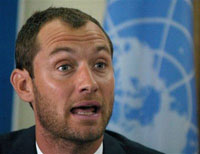 Do Afghans know who Jude Law is?

Together with director Jeremy Gilley, the Oscar-nominated Law has returned to Afghanistan to help maintain momentum for Peace Day - an annual day on Sept. 21 urging a global cease-fire and nonviolence.

The United Nations General Assembly adopted Peace Day in 2001, following a lobbying campaign by Gilley which he documented in the film "Peace One Day."

"When I left Kabul last year, I was hugely moved not by the conflict that I have read so much about, but by the people's courage and the people's sense of hope," Law told reporters in Kabul on Monday.

"It seemed that they really want to make this day, the Peace Day, work. And they did," Law said. "People recognize the day, because they recognize that lives could be saved."

Noted for his roles in movies such as "The Talented Mr. Ripley" and "Cold Mountain," Law helped Gilley produce his second documentary film, called "The Day After Peace."

Law said the movie "was the most important film I have been part of."

Law and Gilley, who arrived in Kabul on Sunday, are to meet President Hamid Karzai, top NATO and U.N. officials, and members of the aid community.

Last year, they traveled and filmed in treacherous areas of eastern Afghanistan to help promote the day, on which they hope weapons will fall silent, allowing help to reach those most in need.

Gilley said in Afghanistan over 1.4 million children were able to be vaccinated against polio on Peace Day as a result.

"The world celebrates so many days that often separate and segregate us ... and yet there is none that ties us all together," Law said.

He said ordinary Afghans, who marched and prayed as they marked Peace Day last year, are among the film's stars.

"It is Peace Day's commitment to take this film as a message from people of Afghanistan to the rest of the world," he said.

The visit coincides with one of Afghanistan's most violent periods since the ouster of the Taliban from power in 2001. More than 3,700 people - mostly militants - have died as a result of the war this year.

Law said that even as Kabul has become more dangerous, hope among its people has remained surprisingly high.