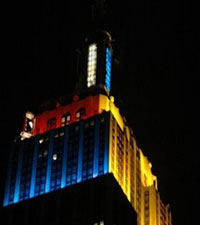 The Empire State Building is shining with Olympic spirit: Each of its top four sides are being lit with the different colors of 66 competing countries.

The Empire State Building's manager says it is the first time the iconic building has split the tower's sides with four separate country's lights.

The lighting honors the top 66 countries taking part in the Summer Games in Beijing, based on the number of athletes from each country. The lights began on Aug. 7 and continue through the end of the games on Aug. 24. The first and last day's lights honor the U.S. and China.

The Empire State Building on Wednesday was lit from sunset to midnight to salute Cuba on its north side, Slovenia on its west side, Ukraine on its south side and Spain on its east side.