The man who witnesses said stabbed, beheaded and cannibalized a fellow traveler on a Greyhound bus in Canada is due in court Tuesday. 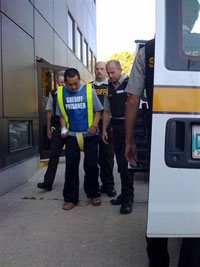 A judge is expected to rule on a request that Vince Weiguang Li, who's charged with second-degree murder in the slaying of 22-year-old Tim McLean, be sent for a psychiatric evaluation.

Li, who immigrated to Canada from China four years ago and worked for a time as a church custodian, did not enter a plea to the charge when he first appeared in court Friday, and has since been kept in custody in Portage la Prairie, Manitoba.

Passengers on the bus described a horrific scene that began late Wednesday as they shuttled through the darkness along a desolate stretch of the TransCanada Highway about 12 miles (19 kilometers) from Portage La Prairie, Manitoba.

Thirty-seven passengers were aboard the Greyhound, some napping and others watching "The Legend of Zorro," when Li suddenly attacked McLean.

Li allegedly stabbed McLean several dozen times as others fled the bus, witnesses said. He then severed McLean's head, displayed it to the frightened passengers gathered outside the bus and began hacking at the body. A police officer at the scene reported seeing the attacker hacking off pieces of the victim's body and eating them, according to a police tape leaked on the Internet.

A church pastor, Tom Castor, who helped hire Vince Weiguang Li soon after he immigrated in 2004, said the man never showed any sign of anger or emotional problems.

"He seemed like a person who was happy to have a job, was committed to doing it well and didn't stand out in any way (in terms of) having anger issues or having any other issues," Castor said.

Church officials vetted Li by talking to people listed on his application as personal references. They also checked for a criminal record. There were no signs of trouble.

Castor said Li's wife, Anna, who immigrated with him from China, was "shocked and very much afraid as to what this is going to mean for her own life."

Almost 80,000 people have joined an online memorial group for McLean.