An official says an Islamic court in northern Malaysia has jailed four Muslim men for taking part in a transvestite beauty pageant. 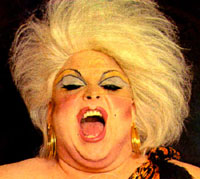 Mohamad Abdul Aziz Mohamad Noor, a senior official in the Islamic department in Kelantan state, says the men were sentenced to seven days in jail and given a 1,000 ringgit (US$310) fine Sunday after they pleaded guilty to cross-dressing.

He says the men were arrested together with 11 others on Friday for participating in the beauty pageant at a resort.

Mohamad Abdul Aziz said Monday that the others are expected to be charged next month.

Malaysia has both Islamic and secular courts. Shariah courts administer civil matters for Muslims, who make up more than 60 percent of Malaysia's 27 million people.

Transvestism is the practice of cross-dressing, which is wearing the clothing of the opposite sex. Transvestite refers to a person who cross-dresses; however, the word often has additional connotations.

The term transvestism has undergone several changes of meaning since it was coined in the 1910s, and it is still used in a variety of senses. Therefore it is important to find out, whenever the word is encountered, in which particular sense it is used. However, to understand the different meanings of transvestism it is necessary to explain the development of the term and the reasons behind the changes of meaning.