Don Imus is finding himself in a familiar position on his morning radio broadcast: explaining his on-air remarks about race. 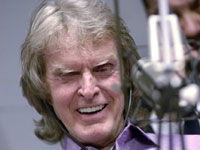 WABC and Citadel Broadcasting Corp. Vice President Phil Boyce said Imus would discuss his latest comments on his Tuesday morning show - comments that upset some African-American leaders. Boyce, however, said it was unlikely the broadcasters would take disciplinary action against him.

During a conversation Monday about the arrests of suspended Dallas Cowboys cornerback Adam Jones, Imus asked, "What color is he?"

Told by sports announcer Warner Wolf that Jones, who used to be nicknamed Pacman, is "African-American," Imus responded: "There you go. Now we know."

Later Monday, Imus responded to criticism of his comments, saying he had been misunderstood.

"I meant that he was being picked on because he's black," Imus said in a statement.

The on-air exchange came six months after Imus' return to work on a new show on WABC-AM following his firing from MSNBC and CBS Radio for making a racially and sexually charged comment about the Rutgers University women's basketball team. When he returned to work, Imus gave a lengthy on-air apology and pledged to use his new show to foster an open dialogue on race relations.

Jones told The Dallas Morning News in Tuesday editions that he was upset by Imus' comments and plans to pray for the controversial radio personality.

"I'm truly upset about the comments," Jones said. "Obviously Mr. Imus has problems with African-Americans. I'm upset, and I hope the station he works for handles it accordingly. I will pray for him."

On Monday before Imus explained his words, civil rights leader Al Sharpton criticized the remark, saying his National Action Network would look into it. Sharpton was one of the chief critics who successfully pushed for Imus' firing from his televised radio show in April 2007.

"I find the inference of his remark disturbing because it plays into stereotypes," he said in a statement. "We will determine in the next day or so whether or not his remark warrants direct action on our part."

Boyce said Imus had explained himself in a private conversation Monday afternoon and the explanation was satisfactory. "I think some people may be misunderstanding what he meant," Boyce said.

Rutgers women's basketball spokeswoman Stacey Brann said there was "no need to revisit the past" and wouldn't comment further.

On Monday's show, Imus and Wolf were discussing Jones' request Saturday that people stop using his nickname. Wolf explained Jones was suspended from the NFL following a shooting at a Las Vegas nightclub, and he added that Jones had been "arrested six times since being drafted by Tennessee in 2005."

Imus' next words were, "What color is he?"