U.S. officials hunted for the source of a salmonella outbreak in 16 states linked to three types of raw tomatoes, while the list of supermarkets and restaurants yanking those varieties from shelves and dishes grew. 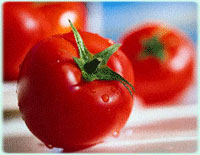 McDonald's, Wal-Mart, Burger King, Kroger, Outback Steakhouse, Winn-Dixie and Taco Bell were among the companies that voluntarily withdrew red plum, red Roma or round red tomatoes unless they were grown in certain states and countries.

The U.S. Food and Drug Administration is investigating the source of the outbreak, agency spokeswoman Kimberly Rawlings said. "We are working hard and fast on this one and hope to have something as quickly as possible," Rawlings said Monday.

Cherry tomatoes, grape tomatoes, tomatoes sold with the vine still attached and homegrown tomatoes are likely not the source of the outbreak, federal officials said.

The Centers for Disease Control and Prevention has said that since mid-April, 145 people infected with salmonella with the same "genetic fingerprint" have been identified. At least 23 people have been hospitalized.

A 67-year-old cancer patient in Texas who health officials said was sickened by salmonella at a Mexican restaurant is believed to be the first death associated with the outbreak.

The death of Raul Rivera last week has been officially attributed to his cancer, but Houston health department spokeswoman Kathy Barton told the Houston Chronicle in Tuesday's editions that the salmonella strain was a contributing factor.

Rivera's wife said he was hospitalized after eating pico de gallo, a tomato-based condiment, in late May while celebrating good news about his cancer treatment.

Salmonella is a bacteria that lives in the intestinal tracts of humans and other animals. The bacteria are usually transmitted to humans by eating foods contaminated with animal feces.

Most infected people suffer fever, diarrhea and abdominal cramps starting 12 to 72 hours after infection. The illness tends to last four to seven days.

The FDA warned consumers in New Mexico and Texas as early as June 3 about the outbreak. The agency expanded its warning during the weekend and chains began voluntarily removing many red plum, red Roma or round red tomatoes from their shelves in response.

The salmonella causing the outbreak is a very unusual type called salmonella saintpaul, said FDA Commissioner Andrew C. von Eschenbach, who added it was not more virulent than other types of salmonella.

McDonald's, the world's largest hamburger chain, stopped serving sliced tomatoes on its sandwiches as a precaution, but will continue serving grape tomatoes in its salads because no problems have been linked to that variety.

Burger King Corp. said it had withdrawn raw round red tomatoes from most of its U.S. restaurants, as well as locations in Canada and Puerto Rico and some other Caribbean islands.

Cincinnati-based Kroger Co., the nation's largest traditional grocery chain, said it pulled the three types of tomatoes from all its stores in 31 states on Sunday per the FDA advisory. The company had early last week pulled the tomatoes from stores in Texas and New Mexico.