A British man who shot his wife and baby girl dead in bed in their home outside Boston will go on trial Monday on two counts of first-degree murder. 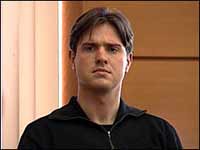 Authorities say Neil Entwistle fired two .22-caliber bullets into his wife, Rachel, and 9-month-old daughter, Lillian Rose, then fled to his family's home in Worksop, England, because he was despondent over mounting debt and dissatisfied with his sex life.

In the days before the killings, authorities say, he conducted online searches for information about murder and suicide.

Entwistle, 27, insists he loved his family and was so horrified at finding them slain that he returned to Britain to be with his parents. He said he did not call for help because it was obvious they were dead.

Entwistle's attorneys have proclaimed his innocence, but have not given any hint of their trial strategy. Attorney Elliot Weinstein has repeatedly said he is concerned that Entwistle cannot receive a fair trial because of the extensive media coverage. On Friday, the judge denied a request to move the trial.

Entwistle and Rachel Souza met in 1999 at Britain's University of York, where she was spending a year abroad. They married in 2003 and lived in England for two years before moving to Carver, Massachusetts, a small town about 40 miles (65 kilometers) south of Boston, in summer 2005 to live with her mother and stepfather.

Her family told police they never saw any signs of trouble, except for one argument over money they overheard in the fall of 2005.

Entwistle told police his marriage was "perfect," they did not fight and never had any "cross words."

But prosecutors said Entwistle, a computer programmer, was unable to find a job after the family moved to the United States, and charged large amounts on credit cards. He started a number of Internet businesses, including a Web site that promised customers as much as $6,000 (EUR 3,869) in monthly earnings and another that offered a manual to help men enlarge their penises. All of them failed.

Searches of his computer showed that, beginning in August 2005, he joined a Web site called "Adult Friend Finder." In the week before the killings, he allegedly visited Web sites called "blondebeautyescorts" and "naughtynightlifeescorts." After he had returned to England, he tore a page from a London tabloid containing hundreds of ads from women "providing a variety of escort and sexual services," according to court documents filed by prosecutors.

Although financial pressures were mounting, the family had moved out of Rachel Entwhistle's mother's house into a $2,700 (EUR 1,741)-per-month rented house in Hopkinton, in Boston's southwest suburbs. Just 10 days later,  Rachel and Lillian were dead.

Entwistle told state police that on the day of the killings he told his wife he had a job interview, but the interview did not work out so he went shopping for computer parts. Prosecutors said there was no job interview.

Entwistle said he discovered his wife and daughter dead when he returned home two hours later. He said he was so distraught that he got a knife from the kitchen to kill himself, but could not go through with it because he "knew it would hurt," according to prosecutors.

Prosecutors say that after his wife and child were shot, Entwistle drove 50 miles (80 kilometers) to his in-laws' house in Carver and returned a .22-caliber handgun he had taken earlier from his father-in-law's gun case. Entwistle's DNA was found on the grip of the gun and DNA matching Rachel was found on the muzzle, court documents say.

Authorities found Entwistle's car at Boston's Logan International Airport. Entwistle bought a one-way ticket to England and boarded the flight an hour later with no luggage.

Police found the bodies two days later after being called by concerned relatives. Rachel Entwistle and her baby girl were snuggled together in bed, the infant nestled in her mother's arms, tucked under a thick comforter in the master bedroom of their home outside Boston. Both had been shot.

Rachel Entwistle's mother, stepfather and brother plan to be in court every day, said Joseph Flaherty, a family spokesman.

"They go into the process with great faith that there will be justice for Rachel and Lillian," Flaherty said.