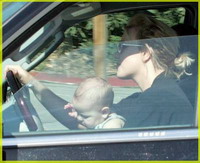 Federline attorney Mark Vincent Kaplan told Superior Court Commissioner Scott Gordon that there have been 14 laboratory requests for drug testing and Spears failed to respond to eight of them.

Spears, a tabloid fixture thanks to her public blunders and turbulent personal life, was ordered last month to temporarily surrender custody of the two boys.

Anne Kiley, Spears' lawyer, argued the previous court order was unconstitutional and Spears did not respond to the lab phone calls within an hour, as ordered by the court, because she was sleeping.

Kiley asked that Spears be given six hours to respond to the laboratory phone requests.

He suggested Spears get a separate cell phone for lab-only use.