Most people go to the beach to get away from their computers, but now beach-goers in Spain's Catalonia region can check their e-mail directly from their towels. 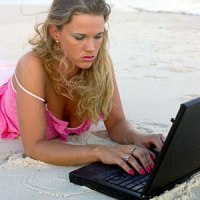 The town of Castelldefels just outside Barcelona began offering free wireless Internet on its beaches Monday.

The connection, enabled by five Wi-Fi antennas installed at various points along the beach, will cover five kilometers (three miles) of shoreline by the end of this week, and eventually extend another kilometer (half mile) out into the Mediterranean.

The signal can be picked up by laptops, PDAs or any other wireless Internet receiver.

Sanchez said that so long as the free wireless network remained in public areas, it wouldn't compete with private Internet providers serving homes and offices.

But one problem remains: Mother Nature.

"Now we're going to see if we can find some way to protect the laptops from the sand," Sanchez told the newspaper La Vanguardia.