Is Pluto a real planet?

But soon, there could be only eight. Pluto faces demotion. 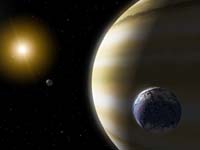 Is Pluto a real planet?

At a conference in Prague later this month, the International Astronomical Union, which oversees such matters, is scheduled to consider a resolution that defines a planet.

Driven largely by controversy over the status of Pluto, which doesn't share several key attributes of the solar system's eight other planets, the resolution could mean Pluto's dismissal from that select group.

Instead, it could be defined as simply one of thousands of small, icy objects in the decidedly less glamorous Kuiper Belt, just beyond Neptune.

An alternative would be to maintain Pluto's planetary credentials, but that potentially opens the door to dozens more planets.

The committee writing the resolution has worked in secret. Few people know what it will recommend. Those who know aren't talking. Egos are involved. Some say U.S. pride has emerged (Pluto is the only one of the nine discovered by an American, albeit most were discovered before there was a United States). And there's no guarantee that the conference will accept the recommended resolution, whatever it is.

From a purely scientific perspective, downgrading Pluto is no big deal, said Daniel Green of the Smithsonian Astrophysical Observatory.

That's the day Clyde Tombaugh, working at the Lowell Observatory in Flagstaff, Ariz., discovered Pluto. He did it by examining hundreds of thousands of tiny stars on photos of the sky taken with a powerful telescope on consecutive nights.

Virtually since its discovery, questions dogged Pluto. It wasn't like the other planets. Too small. Erratic orbit. Not enough of a rocky center.