A solar system astronomers recently discovered near ours has at least one planet that may contain water, a requirement for supporting life, according to a report to appear in the journal Nature. 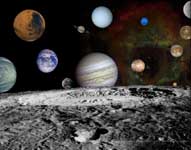 The three planets orbiting the star HD 69830, which is about 41 light-years away and visible with the naked eye, have masses 5 to 20 times larger than Earth and are about the size of Neptune, according to the report in tomorrow's edition of the journal.

The two planets closest to the star probably are rocky, while the outer planet is likely to have a gaseous atmosphere around a rocky core. The outer planet is the right distance from the star to have liquid water, the astronomers said.

"The architecture of this particular planetary system bears some intriguing similarities to that of our own solar system," including multiple planets in nearly circular orbits, Harvard University astronomer David Charbonneau wrote in an accompanying editorial, reports Bloomberg.

According to The Register, t he planets were given away by the Doppler effect. When an object is moving relative to astronomers on Earth, Doppler shift changes the wavelength of light coming from that object. The movement of stars with planets is altered by them in a way which is detectable in their Doppler signal.

“The planetary system clearly represents a Rosetta stone in our understanding of how planets form. No doubt it will help us better understand the huge diversity we have observed since the first extrasolar planet was found 11 years ago.”

The 180-odd extrasolar planets so far discovered by this method have tended towards the more massive end of the spectrum; bigger planets produce more easily detectable Doppler wobbles. The new trio are at the lower end of the scale, and the techniques refined in the course of the investigation should mean that more Earth-sized worlds will be found soon.

A trio of Neptune-sized worlds has been spotted circling a star 41 light years away, in the southern constellation Puppis. One of the planets is by far the smallest ever found in the “habitable zone” of a Sun-like star, where liquid water could exist.

“The astronomer’s dream would be to be able to study the composition and structure of these planets to see exactly what they look like,” says Christophe Lovis from the Geneva Observatory in Switzerland, whose team made the discovery, informs New Scientist Space.