The ripples in space-time created when two black holes merge have been modelled to unprecedented accuracy, according to Einstein's equations, by a powerful new computer simulation. The "waveform" signatures produced in the simulation should help researchers identify the ripples in the data from future gravitational wave detectors. 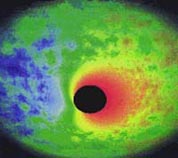 Powerful gravitational waves are thought to shake the fabric of space-time when two black holes spiral towards each other and eventually merge. The waves have not yet been observed, but researchers have been trying to simulate the process on computers in order to predict the expected signal. That will help the nascent searches now in progress.

The signals, called "waveforms", are shaped by factors such as the frequency at which the two black holes orbit each other, their relative masses and their spins. But modelling the merger has proven exceptionally difficult because the process is governed by Einstein's theory of general relativity.

"People have been trying for years to follow the coalescence of two black holes where you treat general relativity exactly," comments David Merritt, an astrophysicist at the Rochester Institute of Technology in New York, US, reports New Scientist Space.

Astronomers said the three-dimensional simulations -- the largest astrophysical calculations ever performed on a NASA supercomputer -- provide the foundation to explore the universe in an entirely new way.

Previous simulations were plagued by computer crashes since the necessary equations, based on Einstein`s theory of general relativity, were far too complex. But scientists at NASA`s Goddard Space Flight Center in Greenbelt, Md., found a method to translate Einstein`s math in a way that computers can understand.

'These mergers are by far the most powerful events occurring in the universe, with each one generating more energy than all of the stars in the universe combined. Now we have realistic simulations to guide gravitational wave detectors coming online,' said Joan Centrella, head of the Gravitational Astrophysics Laboratory at Goddard.