Micron Technology Inc. is now marketing to makers of surveillance and security cameras its line of digital photo and video chips used in cell phone, medical and automotive applications. 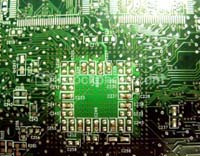 "Historically CCD has had the largest share of the security camera market, but CMOS is bringing new features such as pan and tilt onto one chip," she said. "This is a new market for the technology and we hope to get in on the front end of it."

Micron is seeking to capture more of the emerging demand for very small chips that allow high-resolution photo and video capacity in consumer and commercial devices.

In October, the company released a chip specifically designed for use in automotive digital video systems such as side- and rearview cameras that help drivers park or avoid children in their blind zone.