The children of mothers who are successfully treated for depression have a markedly reduced risk of developing psychiatric disorders themselves. 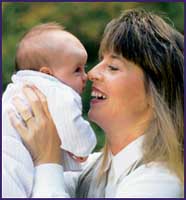 But if a mother's depression continues, her children face an increased risk of also having such problems, a new study showed.

The message is clear.

"If you have a depression mother, you ought to do everything you can to get her better, because there's a double effect," said study author Myrna Weissman, a professor of psychiatry and epidemiology at Columbia University and the New York State Psychiatric Institute in New York City.

"If a mother is sick, it's going to impact the entire family," added Dr. Eva Ritvo, an associate professor of psychiatry at the University of Miami's Miller School of Medicine. "[The study] showed beautifully how children's symptoms went down in a really rapid time frame, and that's encouraging. As a profession, we need to be aggressive about recognizing, diagnosing and treating depression, and we have to be more cognizant of the impact on extended family", reports Forbes.

When depressed mothers achieve remission of their depression after three months on medication, the diagnoses and symptoms in their children of anxiety, disruptive behaviors, and depressive disorders also went down significantly, reported Myrna M. Weissman, Ph.D., of the New York State Psychiatric Institute at Columbia here, and colleagues at other centers.

"From a clinical vantage point, our findings suggest that vigorous treatment of depressed mothers to achieve remission is associated with positive outcomes in their children as well, whereas failure to treat depressed mothers may increase the burden of illness in their children," the authors wrote in the March 22 issue of the Journal of the American Medical Association.

"The bottom line message is: mothers who are depressed, go get treated for your depression," said psychiatrist A. John Rush, M.D., of the University of Texas Southwestern Medical Center in Dallas, a co-author. "It will help not only you, but your child," informs MedPage Today.