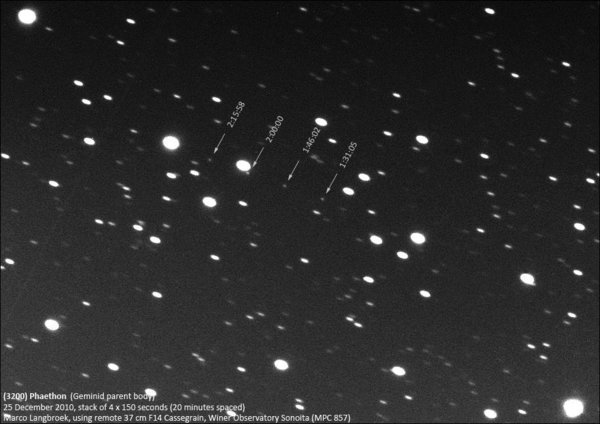 A near miss is what cosmic gazers predict for thethree-mile-wide (5 km.) asteriod/comet 3200 Phaethon which will skim past Earth days before Christmas. Experts say it will miss Earth by a few million miles, considered a near miss in cosmic terms. It is referred to by some as a rock comet.

The near miss is expected to take place on December 17, with the object presenting features of an asteroid and a comet, described by NASA as "potentially hazardous". Putting the object into perspective, the asteroid that hit the Yucatan Peninsula 65 million years ago was twice the size, or six miles across, an impact which shook the planet and destroyed up to three quarters of species living here.

American (NASA) and (Russian Immanuel Kant Baltic Federal University, Kaliningrad) scientists have been tracking the asteroid, which has a plume of dust behind it and is thought to have lost part of its volume over time, crumbling into smaller segments during its passes around the Sun.

It is believed that the Geminids meteor shower, which occurs this year on December 13/14, is caused by Phaethon 3200, a yearly event when the Earth passes through the trail left by the celestial body. Every 1.43 years, it passes near the Sun, at a distance of one-third of Marcury's orbit and crumbles, losing its mass and creating a meteor shower, fragments flashing through the Earth's atmosphere at 80,000 miles per hour (130,000 km.)

The asteroid has the provisional designation 1983 TB (the year it was discovered by astronomers Simon F. Green and John K. Davies) and is classified as an Apollo asteroid, named after Phaëton (Fei -e-thon), the son of the Greek Sun God, Helios because it passes nearer to the Sun than any other asteroid.